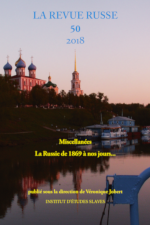 Une semaine à Saint-Pétersbourg. Octobre 1869, par Arsène Legrelle Arsène Legrelle, a French scholar and translator, sets foot in Saint-Petersburg in October 1869. He delivers here a spontaneous, vivid and detailed account of the seven days spent in the city he discovers with great enthusiasm. All the sights are described with an almost photographic accuracy and a touch of humor. An untimely telegram puts an end to the excitement of this first stay. Four longer trips to Russia will follow, which will be recounted in a book, Le Volga (1872).

Présences russes à Pékin : « Ce qui, longtemps oublié, fait retour désormais… », par Hélène Menegaldo Orthodoxy was introduced in China in the 13th century through khan Koubilai’s Russian prisoners. In the 17th century, the Cossacks defeated at Fort Albazine set up in Beijing the orthodox community of Beïgouan which is destroyed during the Boxers’ revolt but, being rebuilt, serves as a shelter for refugees fleeing from Siberia after the defeat of White Russian armies. The Japanese invasion in 1937 and the victory of the Communists in 1949 bring the "Russian Beijing" to an end.

« Le sang a tué ton âme... » (Ce qui ne fut pas de Boris Savinkov), par Michel Niqueux Historical and literary introduction to B. Savinkov’s novel (1879-1925) What never happened (Three brothers), published in Russia in 1912-1913. The novel, written by a desillusioned terrorist, raises the issue of moral justifications for terrorism, through the lives of three brothers during and after the 1905 uprising, and their relationship to their party leadership. Based on Tolstoy’s War and Peace, the novel will, later on, inspire Camus and Malraux.

La révolution vue par Ivan Bounine et Jours maudits, par Dr Holger Gemba (Bochum) Ivan Bunin’s Cursed days The literary and documentary text Okajannye dni [Cursed days] (1925, 1927 Paris, 1935 Berlin), which focusses on revolution and civil war and is written in diary form, represents a dramatic biographical and artistic point of transition in the life and work of Ivan Bunin (1870-1953). In no other literary work (except for his diaries) Ivan Bunin appears as radical, open and emotional as in this shocking and at the same time poetic text. Bunin’s Cursed days can be considered a key text for the understanding of his complete works.

Le jeu du pouvoir soviétique à Brest-Litovsk, par Alexandre Choubine Soviet Power’s Games at Brest-Litovsk The peace treaty of Brest-Litovsk was signed by the Central Powers and Soviet Russia on March 3, 1918. But peace negotiations had started on December 22, 1917. The bolsheviks tried to prolong the proceedings in the hope of the outbreak of revolution in other countries. In fact, their leaders, such as Lenin, Trotsky or Bukharin, not speaking of the Socialist Revolutionaries, were not unanimous at all. Trotsky, for instance, head of the Soviet delegation since January 9, called for a recess, Lenin was reluctant. So the discussions lasted quite a time and meanwhile the Kiev Rada, on behalf of the Ukrainian Republic, also signed a peace treaty on February 9, 1918. It seems that the harsh civil war which began in May 1918 is largely the consequence of the signature of the peace in Brest-Litovsk.

Arkhanka, mon berceau !, par Maria Reformatskaïa The author is using documents from a personal archive and tells a story based on anecdotes as well as edited memoirs of her mother Nadezhda Reformatskaya. She had the fortune to spend her youth in one of the last small Russian country homes. Lively accounts of provincial country life at the beginning of the twentieth century give way to dramatic scenes of the conscription to send troops to the frontline of the First World War. The title of the article paraphrases the lines from a poem by A. N. Nekrasov “On the Volga” (1860).

Saint-Georges, trait d’union entre Orient et Occident, par Geoges Martinowsky The St-Georges boarding school as a link between East and West The St-Georges boarding school founded in 1921 in Constantinople by Jesuits in order to offer a shelter for young Russian immigrants, was moved to Namur, then Paris and finally Meudon before closing down in 1970. The author of the article, a former resident at Meudon, starts by evoking his personal memories, then he broadens the scope of his article by setting up the Jesuits’ action within the framework of an attempt at bringing together and allowing mutual recognition between Orthodox East and Catholic West that were separated since 1504.

Tournant du XXe siècle en Russie. Une famille dans la turbulence, par Tatiana Balakhovskaïa & Anne Laurent The ordeal of two families from Kiev The Schwarzmann and Balachowsky families gave the world not only the famous philosopher Leo Shestov, but also many other people who made a significant contribution to science and culture. After the revolution, they lost their fortune and had to leave Russia and settle in different countries. Despite this, the relatives kept together and supported each other in difficult circumstances.

Dostoïevski, le regard-pilote de Malraux, par Sylvie L’Hermitte-Howlett «  As the sharks are preceded by their pilot-fishes, our look is preceded by a pilot-look, which suggests a meaning for what it is looking at....  » (André Malraux, L’intemporel) Different readings of Dostoievsky’s novels enable Malraux to weave a dialogue with his «  pilot-fish  ». At the Writers’ Congress in Moscow (1934), his antifascist commitment allows Malraux to praise, in opposition to socialist realism, Dostoievsky’s romantic composition. By meeting the techniques of Dostoievsky and Eisenstein, Malraux opens the way to modernity for Soviet literature. In spite of Stalinist censorship, Malraux pays tribute to the one who inspired his esthetic and philosophical ideas.

La condition humaine d’André Malraux : pourquoi le roman n’a pas été édité en URSS dans les années trente, par Tamara Balachova By studying the documents of Moscow archives and by comparing of original novel with available fragment translations, the author of the article arrived to conclusion that there is no published full translation of the most famous novel by André Malraux La condition humaine. The paper analyzes articles of the Soviet press of that period, memoirs and other documents, which help to understand why the famous novel of the world known writer has not been published in the USSR.