Françoise DAUCÉ Volunteers for the war ? Good deeds and bad causes of volunteers in Russia Since the adoption of a law on volunteering in 2018, the Russian state has been supporting the "good deeds" of young citizens mobilised to serve socially useful initiatives. Within the framework of the #Myvmeste programme, this development was particularly supported during the Covid 19 pandemic to help the most vulnerable. It allows the "new heroes of our time" to be recognised for their charity. Once war broke out, the mobilisation of volunteers was redirected to serve the aims of the war (aid for the families of those mobilised and for the occupation of the new annexed territories). From health volunteers to military volunteers, the activists of the #Myvmeste programme thus slipped naturally from "good causes" to the "dirty work" of the Russian state.

Jules Sergei FEDIUNIN Classifying Russia’s populations through the prism of nationalism : Semantic struggle over a constitutional amendment This article examines the debate over the name of the community that underpins the Russian state against the backdrop of the 2020 constitutional revision. After an overview of the issues at stake in this reform, the article explores the suggested ways of dealing with the term “multinational people of the Russian Federation” [многонациональный народ Российской Федерации], which is enshrined in the Russian Constitution of 1993. Two main visions of nationalism, one “civic” and the other ethnic or ethnocentric, are analysed. Each of these visions carries an identity project that is meant to succeed the current constitutional definition of the Russian political society. While the first project puts forward the notion of a “nation of Russia” [российская нация] and emphasizes the principle of unity rather than diversity, the second rejects this view in favor of a definition of the ethnic majority [русские] as the only “state-bearing people” [государствообразующий народ], at the expense of minority populations. The article concludes with an analysis of the ambiguous solution proposed by Vladimir Putin’s regime, which involves reaffirming the term of “multinational people” while at the same time introducing into the Constitution the notion of “state-bearing people”, whose referent remains unclear.

Liudmila SHARAEVA Classification of types of cultural censorship in contemporary Russia (1991-2019) After analysing several cases of censorship in contemporary Russia, mainly in the field of contemporary art, we divided the censorship criteria according to which the authorities directly or indirectly block a work or an artist into political, ideological, religious and moral criteria. We finally came to the conclusion that these criteria were largely situational and that the classification was arbitrary, because behind all the cases of censorship examined there was a state that used various arguments to exert control over culture and thus over society.

Liliya DYACHENKO-ESCALLE Bibliographical adventures of Alexei Remizov in Paris : How was created the book about Russian literature The Fire of Things This article examines how Alexei Remizov searched bibliographic references and materials about Russian literature for his book The Fire of Things. Dreams and Foredreaming (1954) which he wrote while his exile in Paris. This book is a kind of classification of dreams we can find in famous Russian texts of the XIXth century (by Pushkin, Gogol, Dostoevsky and others). It has the form of a collage alternating long quotations and Remizovian comments. Given the writer’s poverty and the conditions of emigration, access to Russian books was a real challenge. Thus, it was only thanks to the help of Remizov’s bibliophile friends that The Fire of Things saw the light of day. To show this, we will study the history of the creation and the status of this book. We hope this example will show the importance for literature of librarians and bibliophiles, figures who usually remain on the fringe of the literary world.

Daria TEREBIKHINA-NOËL Several examples of enumeration of non-places in the autobiographical prose of third wave Russian émigré writers More than a simple setting of the narration, a place can be the centre and the organisational principle of the story. This article analyses two autobiographical novels of the third wave Russian émigré writers, The Book of Water by Eduard Limonov and The Return Address by Alexander Genis, structured not on the chronological, but on the principle of locality. Enumerating the important places in the lives of the two writers, and especially the key places of the common trajectory for a great part of the third wave émigrés, the writers built a narration inspired by the XVIII century sentimental journey, and, at the same time, to the postmodernist nonlinear narration that breaks the codes of genre. By describing mostly the non-places of the host country, the authors accentuate their precarious and fragile position outside of their home country, but they insist on describing the same non-places in order to create a common memory in exile and to fill in the blanks of their new life far from their homeland.

Lorène EHRMANN Russian theatre on the French stages since 1991. A comparative study of two cultural events dedicated to Russia : The Russian Season 1994 and The France-Russia Cross Year 2010 In 1991 Russia was perceived in the West as a land of theatre legends. Has this fascination remained intact in the last thirty years ? A statistical study on the scheduling of Russian text in French theatres indicates two different trends, namely an upper trend from 1991 to 2007 and a downward trend from 2007 to 2020. One major event of French cultural policy towards Russia matches each of these periods : the Russian Season of 1994 and The France-Russia Cross Year 2010. But The Cross Year 2010, which is a much wider cooperation than the Russian Season in terms of resources, number of partners and level of programming, took place during the downward trend. What factors could explain this paradox ?

Kateryna LOBODENKO Foreigners in Soviet cinema of the 1920s and 1930s : America and the Americans The author of the article is interested in the way in which Soviet cinema of the 1920s – 1930s depicts the Other, a person of foreign origin, his country and his culture. She takes as an example the representations of America, Americans and Afro-Americans in the USSR and will try to answer the following question : how do these films and their characters fit into the discourse of Soviet propaganda ? The author tries to determine the specificities of the representations of the foreigner on the Soviet screen and notes the ambivalence of these representations. Whether it is a country or a person, they can arouse fascination and sympathy as well as criticism. A worker will always be portrayed with more compassion than his superior-oppressor and life abroad is often perceived as either a beautiful dream or a nightmare. A socialist paradise created on screen as pure propagandist fiction stands in contrast to the harsh reality of capitalist countries.

Mona CLARO Neither by chance, nor planned. Gender, sexuality and childbearing during youth in Russia (1970s 2010s) This article summarizes some of the main results of a PhD thesis in sociology on transitions to adulthood in Russia, with a focus on sexuality, conjugality, and reproduction, and on women. This thesis compares the life courses of the last Soviet generation (that came of age during the Brezhnev “stagnation” years) and the first post-Soviet generation (that came of age under Putin). It analyzes the gendered dimensions of the lengthening of youth transitions that is taking place in Russia since the collapse of communism (in parallel with the diffusion of the most effective contraceptive methods). This thesis focuses on urban middle class, i.e., the social group that is the most inclined to delay the first child. This thesis is based on about forty interviews, contextualized with statistical data, and on the analysis of series of press articles. It shows that in comparison with their mothers, post-Soviet young women are better protected (in terms of contraception) and at the same time worse protected (in terms of welfare state). Given the conditions of employment and of access to housing, they remain very dependent on family solidarities, and in this regard, Russian youth transitions share similarities with youth transitions in Southern Europe.

Alexandr LUTSENKO (In)submissions in Live. A Study on the Production of the Head of State’s Absolute Power in Contemporary Russia How a political power deemed “absolute” is established where during the previous historical period the chief of the state could not enjoy such a preeminent position ? Drawing inspiration from the Eliasian approach, but also from pragmatic sociology and ethnomethodology, this thesis aims to understand how a system of the relations of domination between the head of the state and the tycoons could form in Russia in less than twenty years. To answer this question, the thesis focuses on a particular form of publicly observable ceremonial of deference towards the head of the state television interviews with members of the economic elites. The thesis demonstrates that the domination of the head of the state is based on the collective belief, shared among the members of elites, in a set of rules which prescribe how the person of the president should be treated in the public space. The thesis also shows the central role played by the media in the reproduction of the political order in Russia. The media can be seen as the theater where the belief in the "absolute" power of the president is formed.

Camille ROBERT-BOEUF Collective gardens : between countryside’s urbanisation and city’s agrarianisation. Comparison of Île-de-France region and Kazan region (Russia) This PhD analyses how collective gardens maintain and renew the relationship between town and country in France and Russia. On a local scale, gardens are first and foremost domestic spaces (even intimate spaces), but they also promote community way of life based on agricultural work and solidarity networks. Normalisation processes and tensions between different generations of gardeners are constituent of these gardeners’ communities. On a metropolitan scale, gardens endorse an agrarisation of the city through the creation of agri-urban inhabiting modes and links between actors. Finally, plots help to preserve agricultural land in the city despite urban sprawl and densification. The Franco-Russian comparison particularly supports a reflection on the affirmation of a right to land in relation to the right to the city for precarious populations. 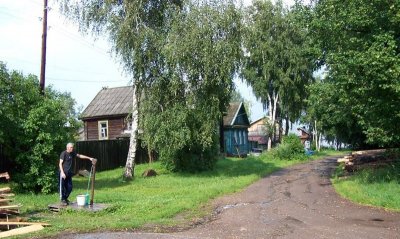