Teaching and learning Russian language in French universities-between the end of the Second World War-and the beginning of the Cold War (1945-1979).

In the Western world, the end of the Second World War and the victory of the USSR marked the new beginning of Russian studies. What language taught French scholars as Russian ? As two main sources of Russian language co-existed in France from the end of the 1950s until the collapse of the Soviet Union - traditional Russian defended by emigrants and sovietized Russian that might have entered French universities with the establishment of cultural relations between France and the USSR – one can wonder : which Russian did French students learn ?

Interactions and influences between the Russian, Occidental and French schools in linguistic research through the example of the notion of «  collocation  ».

As the title implies the article describes various approaches to the definition of the notion «  collocations  » in Russian, Occidental and French linguistic traditions and different interactions and influences between them. Following the work of Vinogradov in the 1940s, we were the witnesses of the birth of phraseology as an independent linguistic discipline in Russia. He has proposed a classification of phraseologisms, based on the conception of the Suisse linguist Bally. The evolution of the concept of «  collocation  » is particularly interesting within groups of phraseo­logisms. In fact, in case this problem is closely related to the theory « Meaning Text » of Melchuk developed in the USSR in the 1960s, then most linguists who have adopted these ideas and use the term «  collocation  » are Western scolars and particularly French (for example, Tutin and Grossmann, Williams, Kanahe and Polguère).

Russian symbolism as an anti-model of the XIX century : example of Nikolaï Minsky.

The authors of the end of the XIX century tried to influence the mind and moral senses of a person by the means of aesthetic emotions. The purpose of our article is to analyse the perception of the first Russian symbolism wave, or, more precisely, the works of Nikolaï Minsky. We will determine if the Russian symbolism can be named an “anti-model” of the era from the point of view of the conservative public. First, we will provide a partial analysis of the perception of the texts of Minsky by his contemporaries in Russia : the men of letters  ; the editors of Severnyj Vestnik ; the journalists  ; the literary critics. Secondly, we will describe the texts published on Minsky in a number of French sources.

The Russian Freemasons, the concept of self-control-and the emergence of the modern reflexivity.

The reflexivity is a relatively recent phenomenon in Western civilization, and its theoretical understanding is still causing discussions. Regardless of what methodological framework is chosen to study the rise and development of modern self-reflexivity in Russia, it provokes many questions because the most important phases of its evolution in Europe (the Renaissance, the Protestant Reformation and the Enlightenment) are absent or exist in metamorphosed forms in the history of Russian culture. Thus the analysis of the correspondence of Russian Freemasons in the late eighteenth century brings a new vision of the process. In the secret society, the important idea of self-control contributed to the development of introspection. But if the sense of inwardness is present in Russian literature during this period, the traditional forms of self-reflection have retained strong influence as well. While Rousseau’s Confessions reflect the emergence of subjectivity in modern Europe, a great number of obstacles hinder the transition from the ancient to the modern paradigm of selfhood in Russia.

What model for Russian high-level sport ? Uses and representations.

« We not only organized and hosted the best ever Winter Olympics, but we also won them » declared Vladimir Putin during his ritual New Year Address to the Nation the 31th of December 2014. Today, sport is one of the most important elements of soft power (NYE, 1990) and at the same time a major factor for building and reinforcing national identity. Since Russia is back on the international stage, how are Russian politics shaping the new Russian sport model ?

“Normalcy” vs. Singularity. The Paradoxes of the Nationalities Policy in Today’s Russia.

This article focuses on the concept of nationalities policy and its public uses in post-Soviet Russia. I start with a detailed analysis of a key official document, the Strategy for the state’s nationalities policy adopted in December 2012, in order to explore how the conceptual Soviet legacies can influence the discursive and political treatment of cultural diversity in the 21st century Russia. Secondly, I provide a criticism of the Russian nationalities policy doctrine, showing that it tries to reconcile three profoundly different principles : civic nationalism, multiculturalism, and neo-imperial and civilizational schemes. I argue that the efforts of the Russian authorities to balance the idea of nation with the idea of civilization blur the real problems, such as federalism, discrimination, and human rights in a culturally heterogeneous context, and disqualify any political discussion about the meaning of the Russian nation. Finally, I demonstrate how the nationalities policy discourse contributes to increasing some dangerous tendencies in today’s Russia.

Transposition of a Russian ideal in Europe : Serbia.

Serbian political parties express a wide range of attitudes towards Russia and towards to Serbian integration into EU. The presence of Russia in the political field is de facto a primary issue. For several years now, Russia has started to promote its own model state. Therefore my analysis is focused on the impact of the Russian model in Serbia and how it influences political discourse and behavior. According to different factions there are various viewpoints concerning the relationship between Serbia and Russia. This article analyses the two main actors having embraced or promoting the Russian model. The first one is the Prime Minister Aleksandar Vučić : he aims at changing Serbia progressively into an authoritarian democracy. The second one is the pro-Russian movement composed by several political parties and groups. Its aim is not only to strengthen ties with Russia, it is also to create a new form of state based on Putin’s theory such as “power verticality” and reinforcements of traditional values.

Who enacts "the public interest" in contemporary Russia ?

The article aims to present the Russian conception of public interest, its enunciation, references and evolution. It intends to analyse the links between the organs of local self-government and the public interest. It is based on a summary highlighting the main notions of Russian power architecture related to administrative reforms (deconcentration, decentralisation, local self-government) engaged after the collapse of USSR.

After the Second World War, the Soviet cinema encounters a certain gain of interest in France. However, the results of the box-offices don’t always meet with the expectations of Soviet film exporation authorities. This article examines the features of the Soviet film distribution in the prism of Franco-Soviet cultural relations and intends to find an explanation to the lack of its commercial succes in France.

This article examines the practice of foreign companies in the Soviet Union in the 1920’s. These relations developed while the newly born Soviet Republic was ruined by the Civil War, by foreign interventions amid an economic blockade. The Soviets desperately needed Western technology provided by foreign companies. The Soviet authorities seemed to show a double standard towards foreign enterprises. On the one hand, they welcomed the foreign investors by adapting Russian civil laws and took measures to ensure Western capital security. On the other hand, the same authorities gradually increased hostility towards foreign investors. It seems likely that this duality gave birth to contradictions that, in the late twenties, ultimately resulted in the departure of foreign companies.

This article presents a translation into French of the little-known text of the French-Lithuanian semiotician Algirdas Julien Greimas (1917-1992) about his relationship with the Russian philosopher, poet and historian-medievalist Lev Karsavin (1882-1952), who was his professor at the University of Lithuania in Kaunas in the 1930s. Under the influence of the approach and ideas of the Russian philosopher, Greimas will return to the dialogue with his teacher in 1987, with the book "On imperfection." 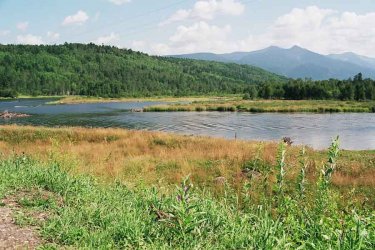